Congratulations to Our 2019 Award Winners

These are our annual Awards given for art works we received in the year 1st January to 31st December 2018. Each year we make two Awards, one for a Series of art works and one for an individual art work. We wish we were able to make several Awards - many of the artists here are deserving of an Award. (See all the previous Award Winners here.)

We are a global arts project, so if you look through our main Gallery you will see art works from an increasing list of countries, including :

Both of this year's Winning Artists have impressed large audiences across many countries, in the arts and across the wider public. We congratulate the two Winners and all the artists whose work was 'Highly Commended' (see below).
The Winner of our annual Award for a Series of art works is Huda Salha, a Palestinian-Canadian artist, for her series ‘Under The Sky’. 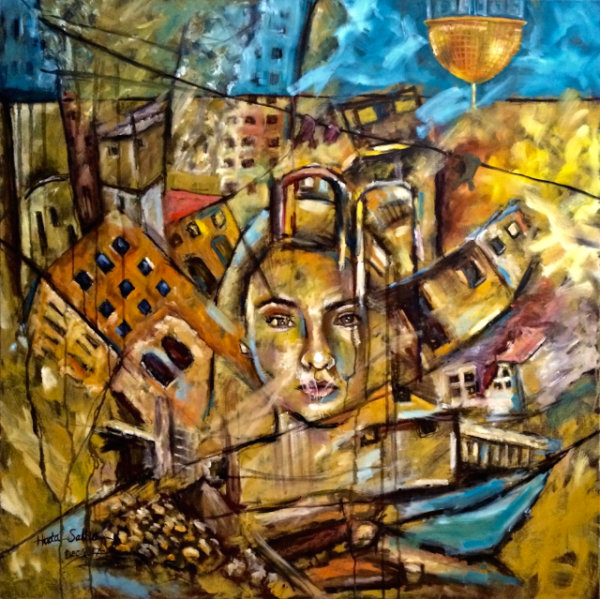 Holes In The Walls of Memory, from the series Under The Sky - by Huda Salha

Huda Salha's winning Series of work ‘Under The Sky’ tackles issues of identity, memory and displacement, as well as refugee and immigration issues. Huda is a Palestinian-Canadian artist with many years of experience in painting. As a descendant of a dispossessed Palestinian family, her visual narratives are informed by childhood memories, family anecdotes and historical and geographical references. Her work reflects larger issues about an entire nation sharing the same oppression across generations. Her works explore the historical, cultural and psychological sense of self, place and experience. She is interested in the way identity and memory are interwoven with place through political and cultural boundaries. 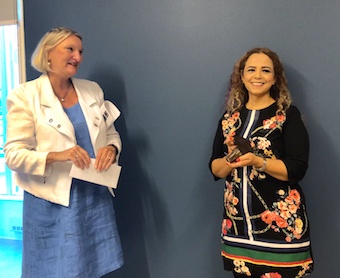 Huda : "I have used art, not only to explore my internal landscape and reflect on my own position as a descendant of a dispossessed family. My personal work has therefore also expanded into a critical awareness of current dilemmas in the world around me, including questions of mapping, diaspora, and ongoing incidents of racial stereotyping. The collective migrations taking place in the past and today evoke my own memories and is evidence of how past history is constantly reconstructed in the present."


PALESTINE - A DEEP INJUSTICE AND A GLOBALLY UNIQUE SITUATION

Some of you reading this may not know why Palestine is so significant : In 1915, during the first world war, Britain made a promise to the Arab leaders that they could have an independent Arab State, including Palestine, if they supported the War against the Ottomans who until then ruled the Middle East, and oppressed the people, including the Palestinians. The Arab leaders agreed and gave their support - despite the people of Palestine suffering mass famine, plague and conflict - while they were helping to defeat the Ottoman Empire. However, in 1917 the British government, in behind-the scenes discussions with Zionist lobbyists and leaders, also agreed to give a homeland to the Jewish people who they saw as needing to be returned to an ancient (yet still-to-be-created) ‘homeland’ in the Middle East.

Not only did the British government not fulfil its previous promise to the Palestinians but it also collaborated with the Zionist leaders to proceed as if the indigenous Palestinian people were not already in Palestine (they have been there since prehistory) and had no rights. Britain at that time had colonies all over the world and was acting in its typically prejudiced colonial way - with vast ignorance of the realities of the Palestinian people and disregarding their obvious dependence on their land. In late 1917 this deal between Britain and the Zionists was expressed in the 'Balfour Agreement' (a short letter) which set in train over a century of colonial oppression, dispossession and violence against the Palestinian people. Sadly, it continues to this day. Over the past 100 years Britain and the U.S.A. have been the primary supporters of Israel's destruction of Palestine, in defiance of many UN Resolutions.

Huda Salha's Under The Sky series shows us the Palestinian people and their situation through Palestinian eyes. They have had their lands, homes, human rights, citizenship - everything - stolen by Israel. Israel could not have colonised, oppressed and stolen Palestine without the continuing financial, political and diplomatic support of the USA and Britain. The oppression in Palestine has been so great and long-lasting that the Palestinian global diaspora now includes many millions of people. In addition there are the millions of Palestinians still trying to survive Israeli oppression within Palestine today. Huda's art works can help us understand the impacts of the actions taken by Israel with the support of these western governments.

Everything that happens today in the political or economic life of the whole Middle East ties back to the specific acts or omissions of the U.S.A., Britain and France since they sliced up the Middle East between them at the end of the first world war. Since then these three countries have, with a sequence of decisions, actions and omissions ensured the dire fate of Palestine and its people. In September 2015 Russia became the fourth external power to exert crucial influence in the region when it decided to give miltary backing to the Syrian regime of Bashar al Assad, one of the world's most appalling dictators.

You can see more of 'Under The Sky' in our Main Gallery here.

Many of us in so-called ‘developed’ countries, have governments who have contributed (and are still contributing) to widespread suffering in places like Palestine, Syria, Kurdistan, Yemen, Afghanistan, Iraq, Burma/Myanmar, Venezuela, across the Sahel and in China, etc - indeed in all of the world’s conflict areas and poorest areas.

'Under The Sky’ helps those of us who live in 'developed countries' to reflect on the problems we foster around the world. Huda's art works (and those of Azad Hama Shekhany, below) expose our own responsibilities and undermine the view that we are merely neutral observers, morally innocent, or ‘distant’ from the suffering in these places.

Such powerful art keeps us more actively alive to life’s full realities and ensures that we face up to our full humanity. In today’s highly interconnected but problematic world this is a vital role for art.


The Winner of our annual Award for an Individual piece of art is Azad Hama Shekhany from Kurdistan for his work ‘The Ship Of Diversity' : 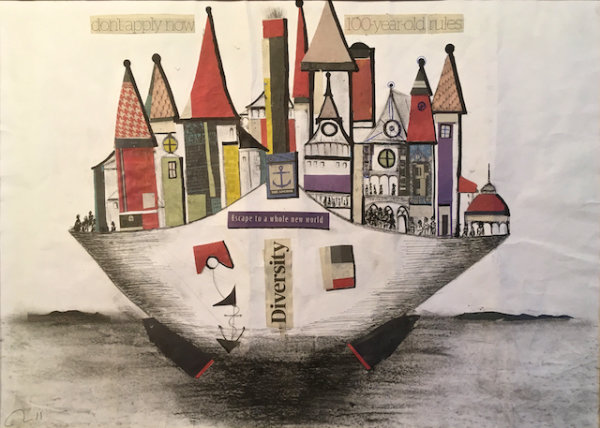 This is from Azad's series 'Ship'. This Series reflects the many peoples now 'adrift' in the world. The United Nations reports that the world now has the highest number of refugees and displaced people since the end of the second world war.

The different buildings on this ship reflect the many different peoples and cultures, adrift together and searching for new lives.

Azad is Kurdish and he and his family have been displaced from Kurdistan by the violence of the Islamic State (ISIS) and the other parties to the conflicts in Syria and Iraq. Azad currently lives between Kurdistan, Italy and the UK. He is a Director of a University in Kurdistan, also works as Dean of an Architectural College in Venice, and as a translator for the Courts in the UK. His art works reflect the traumas of displacement, his now divided life and the fractured lives of scores of millions of other displaced people across the world. 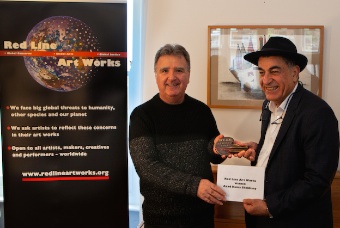 Azad Hama Shekhany (Right) receiving his Award from Chris Greenwood of Red Line Art Works. We are very grateful to Jan Allain, Curator of an Exhibition of Azad's work in Brighton, UK, in Spring 2019.

If you have read our notes about both Huda Salha's work (above) and Azad's work then you will see the connections between the current state of the Middle East and the responsibilities of western governments in creating and sustaining those problems.

You can see more of Azad's art works in our Main Gallery here.

Each of these artists were Highly Commended for their Series of works :

Each of these artists were Highly Commended for their Individual works :