"Patriarchy is like the elephant in the room that we don't talk about, but how could it not affect the planet when it's the superstructure of human society ?" - Ani DiFranco


"There is no tool for development more powerful than the empowerment of women." - Kofi Annan


“There is nothing revolutionary whatsoever about the control of women's bodies by men. The woman's body is the terrain on which patriarchy is erected.” - Adrienne Rich


“We have to constantly critique imperialist white-supremacist patriarchal culture because it is normalized by mass media and rendered unproblematic.” - Bell Hooks


"Feminism is the radical notion that women are human beings." - Marie Shear


"I am not free while any woman is unfree, even when her shackles are very different from my own." - Audre Lorde


"We cannot all succeed when half of us are held back." - Malala Yousafzai


"I myself have never been able to find out what feminism is : I only know that people call me a feminist whenever I express sentiments that differentiate me from a doormat." - Rebecca West

This is a strand which runs through all the other big global concerns here. Patriarchy, misogyny and sexism are pervasive in almost all societies on earth - even at the top of the most 'developed' societies (a prime example is the repulsive Trump in the USA - more here) -

and are built into social structures, political systems, laws, economies, education systems and cultures. In fact, about 90% of the world's nations have laws that discriminate against women and girls. All of this disadvantages half the world's population and is ethically and morally unjust. It also creates an enduring set of avoidable problems which are evident in every nation, and gives rise to many kinds of inequalities, for example in : Human rights, democratic and voting rights, health rights, property rights and educational rights. So, all this patriarchy, misogyny and sexism has many facets and it is restricting the progress of global society. The video here is one example of an artistic response (by Shirin Neshat) to this massive set of injustices.

FIRST EXAMPLE : Sexual and reproductive rights are fundamental to being female. These are among the most basic human rights principles guaranteed by international law. But many women and girls all over the world still do not have rights over their own bodies or their sexual and reproductive life. They need quick and easy access to maternal health services, condoms and HIV prevention measures, family planning and abortion. So, women should be in control of planning and ensuring that these services meet their needs. The fact that they are often not is a clear abuse of their human rights. Consequently there are far too many vulnerable women and girls and preventable deaths and injuries. These are just some of the consequences of the continuing subordination of women. The current USA President and administration is a shameful example of mysogyny and sexism operating on all levels (see the photo below, for one example). When Trump in the USA nominated the extremely right-wing Kavanaugh as his choice to sit on the Supreme Court the whole world witnessed a sickening process to rush this appointment through before the USA's mid-term elections (after which there might not be enough support to get Kavanaugh onto the Supreme Court). This process ignored the rights of women whose brave testimonies accused Kavanaugh of sexual assaults or abuses and the process even disregarded men who corroborated all or parts of the very credible testimonies of these courageous women. They have a right to be believed and their testimonies investigated as reports of crimes. We hope that the shameful behaviour of both Trump and Kavanaugh (and their cronies, enablers and supporters) will be remembered at future elections across the USA - as soon as possible. And we hope that the USA's Constitutional procedures which enable Presidents and Supreme Court Judges to be Impeached and removed from office will then be enacted as soon as possible.

SECOND EXAMPLE : In wars and conflicts women and children are more likely to be the first victims

of attacks on civilian populations, to be among the first so-called ‘collateral damage’. Also, women and girls are more likely to be targets of sexual violence, especially rape which has been used as a weapon of war, conflict or gang warfare against women and children. In recent years there has been deliberate use of rape in political conflicts (e.g. in the first and second world wars, Vietnam, the war in the Balkans - the former Yugoslavia - Sierra Leone, Guinea-Conakry, Rwanda and the Democratic Republic of Congo, among many others). This has terrible consequences in terms of unwanted pregnancies, sexually transmitted infections, and psychological trauma. This is often made worse by social stigma and rejection by families, communities or authorities. In October 2018 the Iraqi Yazidi campaigner Nadia Murad, 25, was awarded the Nobel Peace Prize for her work to free the Yazidi people and (in the words of the Nobel Committee) her "efforts to end the use of sexual violence as a weapon of war". Nadia's mother was killed by Islamic State militants and Nadia was a victim of rape and torture by ISIS militants. She was awarded the prize jointly with Dr Denis Mukwege, a Congolese gynaecologist who, along with his colleagues, has treated tens of thousands of victims in the DRC. Dr Mukwege carries out reconstructive surgery to repair the horrific damage inflicted on women who have been raped. The Committee said the pair both made a "crucial contribution to focusing attention on, and combating, such war crimes".

THIRD EXAMPLE : Women and girls are also more likely to be disproportionately affected when civil or public services collapse. When peace arrives women are often excluded (by patriarchal decision-making) from peace-building decisions and processes. Women and girls may be required to carry out valuable public roles during conflict but then have to give up these roles to men when peace returns.

FOURTH EXAMPLE : Even away from conflict situations, ‘cultural normality’ for some women and girls may include : Sexual abuse, gender violence, domestic violence, forced or early marriage, forced or coerced sterilisation, forced prostitution, forced virginity tests (e.g. tests forced on women demonstrators in Egypt during the ‘Arab Spring’ created public outrage), and may even include forced marriage to their rapists (e.g. Article 475 of the Moroccan penal code allows rapists to escape punishment if they marry their victim). Sadly, the list of abuses around the world is a very long list. The World Health Organization says that more than 200 million girls and women alive today have undergone female genital mutilation (FGM) and every year millions more girls suffer this appalling abuse. FGM is both child abuse and a human rights abuse. This art work is a response to FGM. Across the world the long search for change has been quickening in the last few years, especially since the start of the #MeToo movement and the many other associated and supporting movements. For one thing, women and girls are putting social media to a very useful purpose. They are highlighting the pervasive and pernicious nature of mysogyny and sexism. This means that women and girls are creating for themselves a global movement with real pressure to bring about critical change.

FIFTH EXAMPLE : Rights to education are also very important. For example, sixteen-year-old Pakistani schoolgirl Malala Yousafzai was shot by the Taliban in October 2012 but has recovered. In July 2013 she spoke at the U.N. to call for worldwide access to education. She was one of two people to jointly be awarded the Nobel Peace Prize in October 2014 for their "struggle against the suppression of children and young people". Malala is the youngest ever recipient of the Nobel Peace Prize. The other recipient was Mr Kailash Satyarthi, an Indian man, who has headed peaceful forms of protest "focusing on the grave exploitation of children for financial gain". Malala has also won numerous other international awards and recognition. 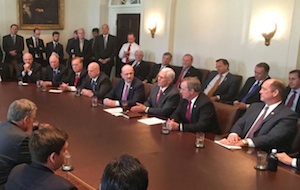 SIXTH EXAMPLE : In almost every part of the world there is also enduring under-representation of women at every level of local and national government – as well as in other non-government spheres (e.g. in the management of private firms and corporations, etc). The consequences of this are bad for society as a whole. The picture (left) is one of thousands (probably millions) that can easily be found illustrating power groups with no women - in this case the US Vice-President is seated among a group of (only) white men in the White House, Washington - but it also happens in many other places.

SEVENTH EXAMPLE : Even in the world’s (supposedly) more ‘developed’ societies a wide variety of gender-based discrimination works against women and girls throughout their lives. Gender stereotyping, the sexualisation of girls and the objectification of women are common, for example in the media and online. The current President of the USA is a glaringly reprehensible model of mysogyny and sexism -

in multiple ways. And this is the so-called 'Leader' of the most economically and militarily powerful country on earth ! We believe that Trump's end times have already begun and we hope that the law is finally catching catch up with him - albeit far too slowly. Across the world women work more than men but are paid less. In the so-called more 'developed' societies invisible ‘glass ceilings’ restrict women’s career progression. Poverty restricts women’s lives and their ability to make progress, even more than men. Writers and campaigners around the world are often targets for horrific online threats and abuse. These are just some of the problems in what are often called the ‘developed’ countries !

To illustrate the scale of change that is needed here is an open letter to all our governments to end the raging war on women. It was sent in Autumn 2018 by the global campaigning group Avaaz after they collected signatures worldwide : 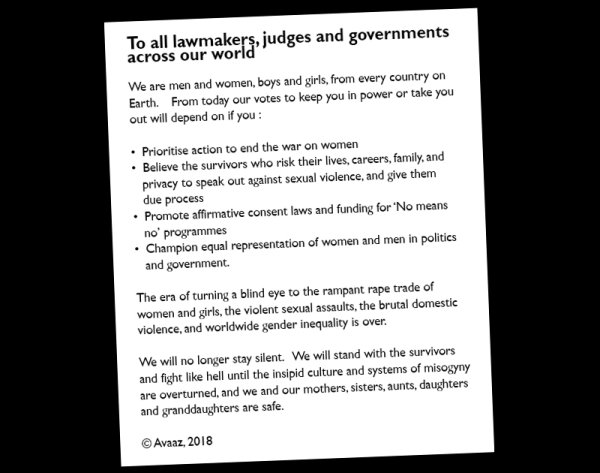 Lastly : Imagine for a moment that (instead of women) it was men suffering abuses and inequality on this massive scale. In that case the injustices would have been tackled by now. So, these injustices can be ended and they should be. 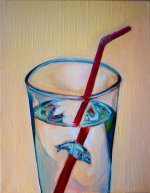