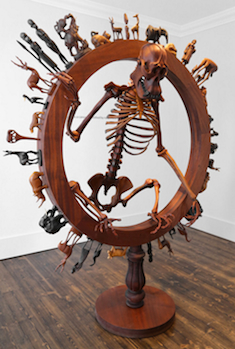 Deforestation is the mass destruction of prehistoric rainforests by man for monetary gain, primarily for the trade of palm oil and paper.

It is a global trend that has depleted nearly 50% of the world’s rainforests, with little consideration given to what has been destroyed or how that forest can be renewed and sustained.

These figures are cited from recognised sources; however, it is the illegal logging trade which is harder to control. For example, Friends of the Earth states that ‘less than 1% of tropical timber entering the UK comes from sources which have been independently certified by the Forest Stewardship Council (FSC). This certificate provides a full chain of custody, which is the only acceptable independent means to guarantee that the source of timber is sustainable, and the best means of determining whether it is legal.’

A study conducted in 2000 by the Indonesia-UK Tropical Forest Management Programme, concluded that 73% of Indonesia’s logging was illegal.

Furthermore, ‘In the last 32 years, Indonesia alone has lost 40 million hectares of forest, equivalent to the combined size of Germany and the Netherlands. (Source : Friends of the Earth)

Putting the unfathomable statistics aside, it is a savagery of equal detriment being forced upon the wildlife inhabiting that once abundant and fertile land, with the Orangutan being among those in danger.

This creature, whose name basically translates to ‘Person of the Forest’, has inhabited the earth’s rainforests for roughly 16 million years, and is a species that shares 97% of our DNA. They are so akin to us that you can look into their eyes and know for certain that a self-aware personality looks back. So much so, that in Indonesian legend the orangutan, is said to speak, but chooses not to in fear that it will be put to work. With this in mind, you would think that we could find it easy to extend the human feelings of compassion and empathy and protect these vulnerable creatures and their habitats.

In Loving Memory depicts an orangutan sitting, locked within a hoop of romantic renditions of the wild that are products of the tourist industry. Serving as a spectacle of interest, looking out at the changing world, his skeleton is immortalised ironically in the very things that caused his demise.

All the materials for this piece have been acquired from junk shops or discarded sources, such as skips. My recycling of this unwanted material highlights the wasteful consumerism we employ. I have carved my own souvenir which maps the great tropical forests of our planet, serving as a curio or reminder of what was lost and the repercussions of our actions.

It is a stark legacy that we leave behind if consideration to such plights is not given.

‘What can I do?’ is a question that is easily asked but not one that is sufficiently answered.

In truth, the large monopolising companies need to lead the change; however we can do our bit by donating, supporting, spreading the word and lobbying via social media and petitions. How about considering whether you need that Cadbury chocolate bar or particular L’Oreal shampoo – even that peanut butter for your toast in the morning could contribute to deforestation. Read the labels and be a savvy shopper, think about where your products originate from.

It is believed that our consumerism is what makes deforestation a necessity, but it doesn’t have to be, if we only think twice.