Edward Snowden is an American privacy activist, ex CIA employee, and former government IT contractor who leaked classified information from the United States National Security Agency (NSA) in 2013. This information revealed numerous large global surveillance programs. Many of these were/are run by the NSA with the cooperation of telecommunication companies and European governments.

On May 20, 2013, Snowden flew to Hong Kong after leaving his job at an NSA facility in Hawaii. In early June he revealed thousands of classified NSA documents to journalists Glenn Greenwald, Laura Poitras and Ewen MacAskill. Snowden then came to international attention after stories based on this leaked material were published in The Guardian and The Washington Post newspapers. More disclosures were made by other newspapers including Der Spiegel and The New York Times.

The following month, the U.S. Department of Justice launched charges against Snowden of violating his country's Espionage Act and theft of government property. He then flew to Moscow where, eventually, the Russian authorities granted him temporary asylum (later extended to three years). 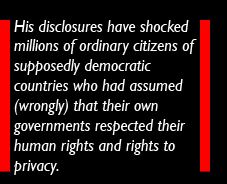 His disclosures have shocked millions of ordinary citizens of supposedly democratic countries who had assumed (wrongly) that their own governments respected their human rights and rights to privacy. This has led to ongoing worldwide debates over, e.g. :

• the illegality of mass surveillance of whole societies
• government secrecy about why they are collecting massive amounts of data on their own populations
• the abuse by governments of the data protection rights of citizens
• the balance between national security and information privacy for citizens.

At the present time Edward Snowden remains in Political Asylum at a secret location in Russia.