The ‘Resource Curse’ – One Example : Pollution in the Niger Delta in Africa

1. Nigeria's economy is heavily oil-dependent. The Niger Delta is home to about 30 million people, living in poverty with many neglected basic needs. The Niger Delta region holds over 90 per cent of Nigeria's proven gas and oil reserves. Oil accounts for 95% of Nigeria's export earnings and over 80% of Government revenue. The history of the Shell corporation's involvement in Nigeria is a mind-boggling example of the massive scale of damage done by corporations, especially in countries with weak governance. 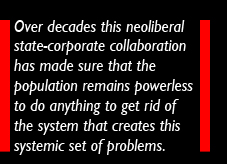 2. The Niger Delta region remains one of the poorest parts of the country. The extreme neglect of Human Rights from all levels of Government and from large corporations (like Shell Oil) is endemic throughout the region. Those in power have favoured personal gain (including through extensive corruption) over community gain. Over decades this neoliberal state-corporate collaboration has made sure that the population remains powerless to do anything to get rid of the system that creates this systemic set of problems. This has caused a deeply entrenched resentment and mistrust of the whole of Nigeria's political system.

3. The Niger Delta is a region where stark inequalities are more visible than anywhere else in Nigeria. Billions of dollars from oil revenues have been distributed unequally, if at all, and have not translated into development and basic services for the population. The majority of the Niger Delta inhabitants lack access to basic infrastructure, health and education services as well as job opportunities. This exemplifies neoliberalism in action (there are many more examples around the world).

4. So, in this country which lacks good Governance, corruption around Oil is extensive and it damages the lives of millions daily. In November 2014 Professor Isaac Olawale Albert, a member of the Nigerian Presidential Committee on Defence Strategy revealed this : "Retired top military officers are the ones behind oil theft which yearly deprives the country of revenue worth billions of dollars."

5. The resulting high levels of pollution and the destruction of previously fertile land also destroys the traditional means of livelihood (e.g. local agriculture and food production). This increases poverty in the region. These fundamental conditions of extreme deprivation have remained unchanged for decades and these conditions drive cycles of violent conflict.

6. When analysing the root causes of endemic poverty in the Niger Delta, it is clear that there are more causes than just economic deprivation. There are a mutually reinforcing mix of political, social, economic, cultural and criminal processes that dis-empower and dis-posess tens of millions in the local population.

7. State institutions are unfavourable to communities. People are powerless to deal with the State and the oil companies. People are therefore unable to influence social, political and economic factors that determine their own wellbeing. So, communities become victims of both corruption and arbitrariness of the government. Discriminatory social and cultural norms, values and customary practices within the family and community also reinforce poverty at the community and family level.

8. These processes make people more vulnerable, powerless and insecure, which in turn perpetuates underdevelopment and poverty. Since the mass of the people are unable to uphold their basic social, political, economic and cultural rights, the population of the Delta is trapped in a vicious cycle of chronic underdevelopment, poverty and violent conflict.

9. The Oil industry in the Niger Delta is, sadly, a case study 'par excellence' of how an underdeveloped state and a massive global oil corporation (i.e. Shell) can keep a whole nation in desperate poverty, gross pollution and murderous conflicts, without basic rights or public services, for decades. This is being done whilst all levels of the state and corporation are mired in state-corporate corruption and in state-corporate denials of their responsibilities. 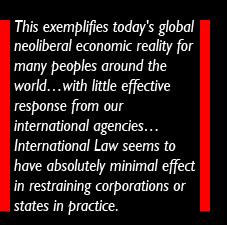 11. This is what corporates and the wealthy (and their friends in political power) mean when they refer to their concept of 'Freedom' under their neoliberal economic approach. Its freedom for the corporates and the wealthy to do whatever they want in their own interests. States and laws ensure this neoliberal state-corporate 'Freedom' is 'freely' imposed on everyone else, without any responsibility for the damage done to the mass of the population.