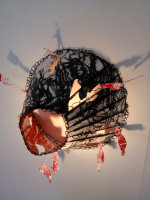 1. Nikkita Morgan is an Irish political textile artist who received her Masters Degree in Textile Design in 2014 from Norwich University of the Arts (UK) and was a recipient of the UK Arts and Humanity Research Council Award for her course of study.

2. The inspiration for Morgan’s practice derives from her on-going passion and interest in the north of Ireland’s troubled landscape and history. The island of Ireland (on the Atlantic edge of north-west Europe) was dominated for several centuries by the imperial and colonial government of the British (the UK) which, over centuries, had installed and empowered their own ruling class, landowners, government, army and laws. This domination imposed much violence, oppression, economic deprivation, famines and denial of civil rights on the Irish population.

3. At the end of the Irish War of Independence (1919-21) the UK partitioned Ireland, withdrew from the south but kept its strongest area - the 6 counties of the north - as part of the UK. The south gained its independence and became the self-governing nation, the Irish Republic. However, from that time onwards the oppression of southern Irish Catholics living in the Protestant-dominated north escalated in multiple ways, as part of UK government policy using all its state institutions, local government, the Police and the Army.

4. Following decades of this oppression, in the late 1960s severely oppressed Catholics in the north demanding their civil rights were met with extreme violence by the UK (British) Army who worked closely with Protestant militias and various undercover ‘security’ forces of the UK government. This spiralled into a thirty-year period of widespread and extreme violence known (euphemistically) in the UK as ‘The Troubles’, during which thousands of people were killed. 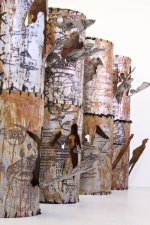 5. Eventually, a peace process running through the 1990s led to ‘The Good Friday Agreement’. This Agreement was approved by voters in two referendums held in the north and south of Ireland in May 1998 and it came into force in December 1999. The peace in Ireland since then stems from this Agreement which included : Removal of the border between north and south, developing a much more unified north-south economy, and many diverse forms of co-operation across the divided Ireland.

6. The north (still part of the UK) and the south of Ireland are both members of the European Union (EU), a continent-wide economic, social, political, military, security and cultural partnership of nations. 'Brexit' is the name given to the move by the UK (Britain) to exit from the EU which it joined in 1975. A UK referendum on the question of whether to leave or remain in the EU took place in 2016 and was narrowly won by the 'leave' vote (52% to 48% in the UK, overall). Most voters in the north of Ireland voted to remain inside the EU but this overall UK vote to leave the EU has endangered the peace and will undo the co-operation which has been actively building for two decades across the island of Ireland. The Irish Republic is content with its membership of the EU and will remain in it. 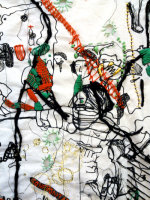 7. Since the Referendum, the UK government has disregarded the voters in the north of Ireland and insists they must leave the EU, along with the rest of the UK (including Scotland where voters also voted to remain in the EU, but are now being made to leave). The negotiations to leave the EU have been the subject of much incompetence, mismanagement and confusion by the UK government and they are responsible for putting the peace in Ireland at risk. In truth, the UK government has spent years fumbling around in the dark, too dishonest and scared to truthfully inform the UK public of the real costs and problems that being outside of the EU will bring. The UK government initially set its own deadline of March 2019 for leaving the EU. However, it missed its own deadline. It then found itself seeking an extension to its own deadline and eventually left (after it won a General Election) in January 2020.

8. Even the most basic facts about this ‘divorce’ are still very unclear and the UK now regards itself as being in a 'Transition' period. Will the UK actually rermain in some kind of long term ‘transition’ ? It says it will spend 2020 'negotiating' a new 'Deal' with the EU, on what terms, and at what costs to the UK and to peace in Ireland ? The UK government does not want its own citizens to be fully informed, it needs only obedient and silent lemmings to quietly follow it over a cliff edge into the isolationist unknown. The UK corporate press and media (which includes the so-called 'national broadcaster', the BBC) have led the obedience and silence about the real issues. 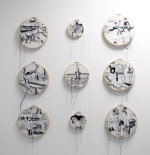 9. This series of art works called ‘Brexit…’ delve into the historic, contemporary, religious and socio-political outlook of this north-south struggle in Ireland. This is a continuation of her previous BA and MA degree research into these subjects. Nikkita : “As an Irish citizen from the north, the departure from the EU will affect Ireland, both North and South.” Brexit may lead to the re-introduction of a hard border running across Ireland, separating the six counties of the north from the south, which will not only damage the economy and all the peace-building and co-operation of the past two decades but may bring back the violence of the 1960s-90s period.

10. Nikkita : “This is an ongoing personal project regarding Brexit and what will happen next to Ireland and the UK. As an Irish citizen from the north, Brexit is a major concern, mainly due to the Irish border problem and what will happen to it. This is one of the key inspirations for my current project entitled Brexit.” 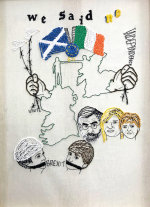 11. “This is an ongoing experimental art research project, where I am visually responding to Brexit from a personal perspective and from what I am hearing and reading in the news. This artwork is mono-printed black & white to resemble newspapers - the idea of how we read what is happening in regards to Brexit. I am printing political figures that relate to the Brexit negotiations and have included key quotes from them."My art works show the key political leaders in Ireland, Scotland, Wales and England and their responses to Brexit. These include : Leo Varadkar (Taoiseach of Ireland), Michelle O’ Neill, Gerry Adams, Mary Lou Mc Donald (all from Sinn Féin), Nicola Sturgeon (First Minister of Scotland), Carwyn Jones (First Minister of Wales), Arlene Foster (DUP), Theresa May (UK Prime Minister).

12. In 2018 I exhibited this work-in-progress collection in Edinburgh (Scotland) where the public had the chance to have their say regarding Brexit, whether they thought it was positive or negative. From these responses I am visually responding to what the audience has written (which was 99% against Brexit).”

13. Nikkita makes her artwork for the public, exhibiting her work internationally, enabling audiences to grasp and understand her vision of conflict through the medium of textiles. She creates a fusion of art, design and craft approaches to communicate Ireland’s troubled situation through figurative visual narratives. She uses a range of textile and non-textile materials, processes and techniques that are selected by relevance, through their relationship to her subject matter, their meaning and how they symbolise the message she wants to portray within her work.