The U.S-based 'Yes Men' are international pioneers in linking art with activism. This two-person art group often devise work where performance art overlaps with conceptual interventions, lampooning and satirising governments and corporations. The Yes Men are Igor Vamos (aka Mike Bonanno) and Jacques Servin (aka Andy Bichlbaum). They began around 2002 and now have several hundred collaborators worldwide.

Exactly twenty years after the 1984 Bhopal Disaster in India (one of the worst ever industrial disasters) the Yes Men set up a website and documentation, pretending to be Dow Chemicals. They also invited the world’s media to interview a Dow corporate PR man, acted by one of the Yes Men. Many were completely taken in by this piece of performance art - none more so than the British Broadcasting Corporation (BBC).

In this video you can watch the Interview (broadcast by BBC World News on 3rd December 2004) in which Andy Bichlbaum, acting as a ‘Dow PR man’, is shown taking full responsibility for the Bhopal Disaster. (Read more below)

The Yes Men : How 'A Lie Can Expose a Greater Truth'

The Bhopal Disaster was caused by the Union Carbide Corporation pesticide plant in Madhya Pradesh, India on the night of 2-3 December 1984. A runaway chemical reaction occurred due to plant and human failures and a highly toxic cloud of gas and other chemicals was released. 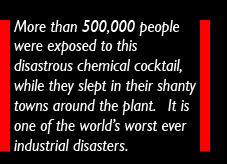 The cloud was denser than air, so it moved close to the ground and spread through the surrounding community and homes. More than 500,000 people were exposed to this disastrous chemical cocktail, while they slept in their shanty towns around the plant. It is one of the world’s worst ever industrial disasters.

Estimates of the deaths and health consequences vary. An immediate death toll figure was around 3,000. Later estimates vary widely. There has never been a true and definitive figure but the number of deaths is likely to be over 10,000 and could be more than 20,000. A 2006 government affidavit said that the leak caused 558,125 injuries, including 38,478 temporary partial injuries and around 3,900 severely and permanently disabling injuries.

The health problems have been devastating, diverse and have continued over the years. Medical care, facilities and supplies have all been minimal.

Why did this happen ?

In the late 1970s and early 1980s there had been a string of leaks and accidents at the site, each resulting in deaths or very serious injuries. Effective government regulation and inspections were paltry or non-existent (this was very 'convenient' for those who owned and ran the plant).

In the early 1980s the demand for the Methyl Isocyanate produced by the plant had declined but production continued and large amounts of it and other chemicals were stored on site. Just before the accident, in November 1984, most of the safety systems were not working or were out of service.

The site had been half-owned by the Government and half by UCC. After the disaster, there were a series of corporate takeovers and mergers, and Dow Chemicals bought the site in 2001.

How Did Dow Respond to the Yes Men's Creative Action ? 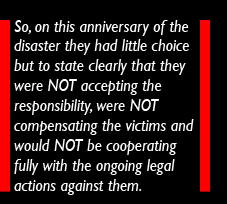 and media statements worldwide, refuting the interview as a hoax. So, on this anniversary of the disaster they had little choice but to state clearly that they were NOT accepting the responsibility, were NOT compensating the victims and would NOT be cooperating fully with the ongoing legal actions against them. In doing this Dow sent around the world another wave of negative publicity for their corporation.

Afterwards, the Dow corporation condemned the Yes Men and accused them of falsely and "cruelly" raising the victims hopes that they would receive better compensation. In response, the Yes Men travelled to Bhopal where they were publicly thanked for publicising the city's ongoing (twenty year-long) struggle for compensation and justice in the face of this massive corporate irresponsibility.

Needless to say, Dow has not yet raised anyone's hopes by admitting full responsibility or offering to fully compensate the local people or the authorities in India who are still bearing the costs (in all senses) of this appalling corporate industrial disaster. Legal actions continue to this day. So, this creative 'lie' by The Yes Men exposed many big truths.

How does this reflect on the media ?

The gullibility of the BBC in seeking out and broadcasting this interview clearly reveals another widespread problem. Like countless media organisations the BBC receives hundreds, if not thousands, of press releases from businesses every day. However, even supposedly 'professional' and 'trustworthy' public broadcasters like the BBC (it is a publicly funded service, not a profit-seeking private business) routinely accept and broadcast Press Releases from businesses and corporations uncritically, as if they are facts or 'truth'.

In this case the BBC obviously did no prior fact-checking, there was no journalistic good practice. The truth is

that even the BBC is so imbued with neoliberal values and assumptions that it simply swallowed whole the 'Dow' Press Release it received, then asked for the interview with the 'Dow PR man', and then let him speak at length.

In this case, luckily, the BBC's ingrained failures enabled the 'Yes Men' to expose the gross irresponsibility of the Dow corporation to a global audience.

If you think the BBC's dumbness here was bad, just consider : Most of the world's press and media are not public bodies but are owned or financed by very wealthy people or corporates and are simply mouthpieces for elites or for corporate and neoliberal propaganda. They actively serve corporate power and have never had any intention of becoming effective critics of it(more here).