This year, Fringe Arts Bath showcased the first exhibition of Red Line Art Works – a community-based not-for-profit voluntary organisation. It was founded in 2012 by Chris Greenwood with an aim to promote artwork (in any art form or media) which reflects on the big issues we are all facing as a global community. One of the hopes of Red Line Art Works is that responsible artists will address global issues in at least some of their art. Over 4,000 people visited the exhibition.

Chris’ involvement over the last few decades in campaigns, demonstrations and protests confronting war, racism, abuses of human rights and climate change, is one of the things that led him to develop Red Line Art Works. His photograph of a picturesque bluebell wood, invaded by a red line trailing into an unknown perspective, was the fronting image of the first exhibition. The red line is a conceptual link for all Red Line Art Works submissions, but the bluebell wood contains a message for the children and grandchildren of our generation, who in future might ask of their elders ‘What were you thinking about? Why did you fail to act? Why didn’t you address at least some of these issues we have to deal with now, in your art?’ 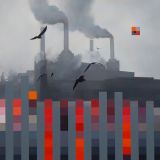 The hope is that artists of our age are aware of the global problems, they are thinking actively about them and they are not content with the course our world is taking. Red Line Art Works invites artists worldwide, of any age, to leave a mark for future generations, as proof that they were aware of the state of our world and concerned about it. Red Line Art Works shows and promotes art which reflects that we are not just mute consumers, but global citizens with a global awareness and a social conscience. However, Chris stressed that this an arts project, not a political campaign. The artists needn’t be political activists, and their usual line of work doesn’t necessarily need to be linked with politics. Red Line Art Works is a ‘home-base’ for artists and creatives to register their global concerns in their art. This in turn helps the members of the audience to validate their own concerns. 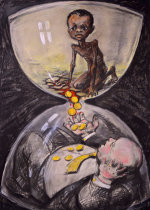 The project’s website www.redlineartworks.org showcases the best of submissions and lists many of the big global concerns. The list is there to provoke thoughts and inspire artists to reflect on these, but it is by no means fixed or final. There are many more very big issues facing humanity. No previous generation of artists have faced this set of global concerns and Red Line Art Works invites all artists and creative people to respond to this. Some contributors choose to create only one piece, but for others the art which started off as one piece, expands into a series, which is always an exciting moment for Chris. For example, The Bath-based artist Rita Lazaro’s series 'Labyrinth of Social Conscience' grew out of a few sketches and ‘medals’ she had created. It was the most prominent work at the exhibition, with a striking commentary on loan sharks, endless wars and abuse of Third World countries for First World profits. Rita’s artwork is a combination of the aforementioned ‘medals’ which convey their message in a 3D form, also translated into a large scale painting. Lined up in a row like soldiers, her pieces occupied a whole wall, and the messages became almost overwhelming in their bleak and straightforward exposure of things we often see in the media but perhaps choose to dismiss or overlook. 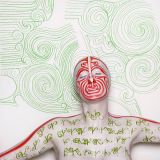 Another extremely rewarding experience for Chris was when the first few dozen pieces arrived from all over the world, including Russia, Romania, Italy, USA and the UK among others. It is interesting to see how artists from various cultural backgrounds interpret the red line, addressing global issues closest to them. On the exhibition opening day Friday, May 24th, Veronica Cordova (Mexico) performed her ‘social sculpture’, laying red roses over photographs of some of the thousands of people kidnapped or murdered in Mexico due to gang activity. For Marina Belikova (Russia), the red line meant a station on the Red Line of the Moscow underground that was attacked by terrorists in 2010, and for two Romanian artists, Manuela Vulpescu & Corina Olaru numerous curved red lines conveyed their concern for disappearing cultural diversity.

Two artists from different geographical locations (Gabriele Quartero from Italy and Russell Bloch from Detroit in the USA) both used red to reflect on the failed American Dream. The fact that artists chose to comment on the politics of their own country, as well as on others, shows how close-knit the world has become. Despite vast geographical and cultural differences, many people care about each other and about our world as a whole. Currently, Red Line Art Works has received over a hundred submissions and the best can be seen on the project’s website www.redlineartworks.org. The exhibition also hosted work by experienced artists, like Terry Buchanan and works by artists who until now had never dreamed of calling themselves ‘Artists’. It is inspiring to see experienced and novice artists linked by their desire to show that they do care about the state of things and our impact on the world. 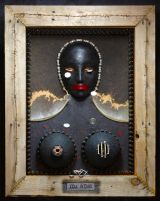 When asked how Chris sees our global future, he commented that two sorts of failure – firstly, climate change and secondly the failure of both corporate businesses and governments (failing in combination), have been leading most of the world into other major problems, like war, inequality, corruption etc. This is a very toxic political mix, and Chris finds himself becoming an unwilling pessimist - but only sometimes. Most people who follow the news would recognise the feeling – of not quite being able to enjoy their lives fully because of all these other global things that swirl around us in dire need of repair. However, most of us are at a loss on how to tackle them because the global concerns seem too big to even grasp. So, many choose to turn a blind eye on these problems just to stop themselves become depressed, but the issues still nag at us on a subconscious level at least. Creativity is one means of escaping such negativity. Turning these anxieties into artistic experiences and collecting them in one place, allows artists and audiences to consider them on a more positive level, in a safe space, and to recognise themselves among other like-minded individuals, all willing to discuss these concerns. Red Line Artworks is a ‘home base’ for such art works – the submitted work needn’t be formal, overly complicated or technical. It is a comfortable space for anyone to show their concerns about the way we are all living now. 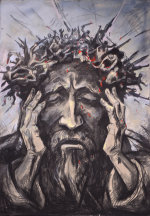 One piece was a depiction of Christ’s Crown of Thorns - the bleeding Christ, his face transformed in agony, weighed under his crown. Instead of ‘thorns’, it was humans bickering and killing each other that was causing him pain. The theological question is often raised in the face of all the wars we witness on TV – ‘if there is an all-loving and omnipotent God, how can he/she allow all the suffering ?’ Rita’s Lazaro's work seemed to reverse this notion by observing that it is us, humans, who are causing the suffering of others, rather than ‘God’ allowing us to suffer.

Red Line Art Works welcomes contributions of art works (using any art form or creative media) to this website and for future exhibitions. For more information visit the website's Home Page or to see how to submit your artwork to the project visit 'Info for Artists'. Or you are welcome to contact us by Email : redlineartworks@yahoo.co.uk.