These are our Awards for art works received in the year 1st January to 31st December 2016.


We make two Annual Awards, one for a Series of work and one for an individual piece. In truth, we wish we were able to make several Awards - many of the artists here made work that is deserving of an Award.

Both of the Winning works this year have made a strong impact on audiences, in the arts and across the wider public. We congratulate the two Winners and all the artists whose work was 'Highly Commended' (see below). These are great examples of art with a conscience.

The Winner of our annual Award for a Series of art works is Gabrielle Cleuren (Belgium) for her series ‘Brave New Old Worlds’. 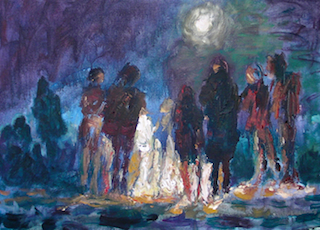 This series consists of over 50 paintings and a 120-page Book. Gaby has created this over a number of years and it has already been exhibited several times around Europe. These works draw our attention to the millions of victims of the (never-ending) ‘War on Terror’ and of recent or current conflicts, for example in : Afghanistan, Israel-Palestine, Chechnya , Libya, Mali, Ukraine, Syria, Yemen, etc.

Gaby’s steadfast focus on the desperate and traumatised refugees in her art works puts to shame all those media bodies and politicians across Europe who use their hostile, xenophobic, racist and hate-mongering standpoint to denigrate these refugees. We should never forget that some European countries are contributors to the violence, conflict, wars and destruction from which these people have been fleeing.

The Winner of our annual Award for an Individual piece of art is Phil Whiting (UK) for his work ‘Who Are These Children ?'. 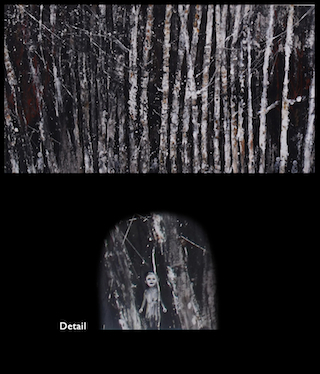 All of Phil’s work is of a very high standard and it has been exhibited internationally, including in the European Parliament, Brussels in 2006. His paintings are charged with deep historical, emotional and poetical resonances.

What may appear to be a sombre landscape of trees is actually a haunted scene, inhabited by small children, hiding, lost, traumatised by violence and conflict, having become almost ghosts, experiencing utter horror in their young lives, first-hand. This is their childhood innocence, their whole lives scarred by deep trauma.

Phil's art incorporates big events and issues, their awful consequences and our responsibilities for them. His work raises tough questions about what we humans have done, what we are doing, what we have failed to do, what we have looked away from, who we really are, what we should be. This is rare and powerful art which penetrates and can leave its mark on us.

Each of these artists were Highly Commended for their individual works :